A Constructive Derivation of the Determinant

If your experience learning about the determinant of a matrix in an introductory linear algebra class was anything like mine, it went something like this: you start with the formula for the determinant of a 2x2 matrix, then a 3x3 matrix, perhaps a generic formula or algorithm for any square matrix, finally ending with a statement like “we care about determinants because if it’s 0, then the matrix is not invertible”.

3Blue1Brown has a great video explaining what the determinant is visually. Since he does a much better job of it than I think I ever could, I’ll just embed it here.

Equipped with this intuition, let’s take a slightly more mathematical approach to derive the determinant formula.

Intuitively, what would we expect a quantity that we claim is the volume to have?

We would expect that the volume is linear in one of the vectors $a_i$, if we hold all other vectors constant. This is what we naturally expect from simple geometry, as illustrated in the 2D case below. 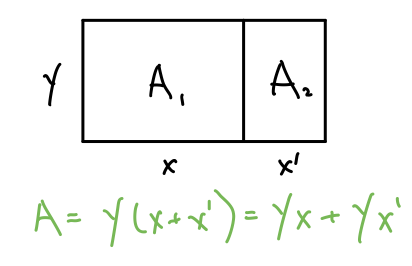 This is known as multilinearity. In general: 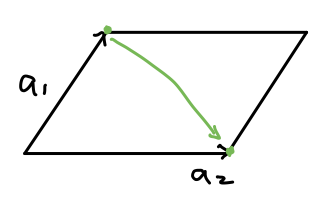 This necessarily implies that if we swapped the order of the two of the columns of A, then the determinant will change signs. This is known as the alternating property.

Determinant of Unit Hypercube is 1

We can now derive the formula for the derterminant from these properties. Note that we can write any $a_j$ as a linear combination of the standard basis $a_j = \alpha_{1,j} e_1 + … + \alpha_{n,j} e_n$. I’m using the convention that $a_{i,j}$ is the $i$-th row and $j$-th column of the matrix $A$. Combining this with multilinearity:

Moreover, since the valid permutations are all over the standard basis, the absolute value of the determinant will be 1, and it’s sign depends on how many swaps we did from the natural order $(e_1, …, e_n)$. We will define the sign $sgn(\sigma), \sigma \in S_n$ as $-1$ raised to the number of swaps. This allows us to simplify the equation above to:

We’ve now arrived at the Leibniz formula for determinants.

A Note on Linear Transforms

Thinking of determinants as volumes change makes many of it’s properties intuitive. For instance: